A short bit of catchup: I’m on a writing retreat near in the beautiful backwoods of Vermont when a nearby tree breaks and falls in the forest for no apparent reason. Note to Katrina: this takes place in 2008.

Now, a list of the Evidence, Hearsay and Memory, to the best of my ability:

1 – When I tell my host Alex about the curious event of the tree breaking in half for no apparent reason, his response is, “hmm,” accompanied by bemused chin-stroking.

2 – We inspect the tree together. See the photos? It is a raw, open wound of a break, at approximately eight feet above ground. The trunk’s diameter is about ten inches. Alex seems impressed, maybe even amused, by the event. “I didn’t expect anything would happen so soon,” he says. “Do you like wine? Red or white?”

3 – Over wine red or white, Alex explains there is a family (a flock? A herd?) of Bigfoot in the area that he has been attempting to document. In fact, he has been luring them to this very location, and says he’s been visited repeatedly over the course of a few months, receiving telltale leave-behinds or, as Alex categorizes them, gifts.

5 – Bigfoot are playful creatures, he continues, and smart. The young ones like to visit the stuffed animal on the tree that I saw on the way to my cabin. As you can see in the photo I forgot that I’d taken and just recently found, it is not a Tasmanian Devil on the tree at all, but something much cuter.

6 – The broken tree was meant to surprise me, maybe scare me, maybe just say “hi.” It wasn’t meant to hurt me. This, of course, is not evidence of Bigfoot’s intention. Just my fuzzy memory of Alex’s explanation of the event. My version of evidence would probably not fly with, say, cops. Or scientists.

7 – Bigfoot like to mark their territories by tucking the tips of young trees under logs or rocks. There were 3 or 4 of them near my cabin. Here’s evidence. 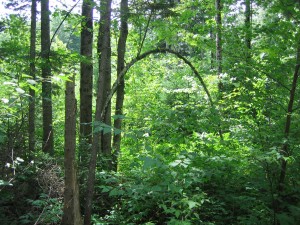 8 – Bigfoot will communicate with each other by knocking on trees with sticks, or with shrill squeaks and grunts. They are swift runners, expert hiders, and have a powerful psychic ability that can whomp a man in the chest and knock him to his feet. This could be considered hearsay, except Alex says he witnessed it. I heard him say it, though, so I guess his observation is my hearsay.

9 – That’s right. A psychic ability to knock a man to his feet. Ponder that, Ghost Hunters.

10 – When I call Carl to tell him about the tree, and Bigfoot, and the fact that I might be home sooner than I expected, his response is, “Bigfoot’s never been known to hurt anyone.” Well, as far as I know, he/she/they have never been known to help anyone revise a novel either.

11 – The next flight back to LA is too early for me to catch, so I am resigned to spending the night. There are no toilets in our cabins. If I need to pee during the night, I’ll need to brave the woods. If I plan to pee in the woods, Alex suggests going a ways away from the structure so as not to attract Bigfoot. Unless I want to, he adds. My other option is to traipse down the trail alone to the big house.

12 – During that first night alone in the cabin, my brain is buzzing as though there is some kind of electrical interference. I try reading, writing, counting, meditating, praying, swigging whisky from my flask, but I am awake all night. The closest I have ever come to this kind of improbable sleeplessness was when I spent the night in a motel in Lodi. There was a couple screaming on the other side of our shared wall, screaming like I have never heard before. Screaming like the scream was going to tear out their own throats, screaming like violence was inevitable. When I woke my boyfriend, he couldn’t hear anything. Nothing. I came to the conclusion that either the motel was haunted or something or someone had taken temporary control of my brain. That’s what my night in the forest with Bigfoot felt like – as though the creature had invaded my brain.

13 – Oh, and I do have to pee. I use an empty water bottle and change my tampon over the trash can.

14 – Another writer, the Mormon Princess (that’s what she told me and I believe her), joins us the next day. She knows Alex from university and seems to be aware of the Bigfoot thing. When she goes to settle into her cabin, which is maybe 50 yards deeper into the woods past mine, there is another sharp crack! Another broken tree. Her huge dog refuses to follow her into the woods, and must be leashed and dragged.

15 – I book a flight back home, but due to isolated location and inconvenient layovers, it’s not until the following day. My brain is fried from no sleep, but I spend the day as I had hoped I would spend it on a retreat. I take a walk in the meadow (in the opposite direction from the Bigfoot-filled woods). I read a Don Barthelme story or book. It may have been Snow White, it may have been something else. It is more exciting than Bigfoot he/she/itself.

16 – I consider stealing the Barthelme book, but I worry that Bigfoot may be reading my mind, and that he/she/it also likes Alex and might do something more aggressive than break a tree if I were to violate Alex or his home in any way. I don’t steal the book and I realize that sometimes I am just a good person out of fear.

17 – I slept in the big house that night without incident.

18 – I would like to mention that Alex was a generous, if misguided host. He was smart, kind, passionate about writing and Bigfoot. It’s taken me years to write about this because I never wanted to “out” Alex in a negative way. But thanks (s0rt 0f) to him, Bigfoot is my story too.

19 – When I went to say goodbye to the Mormon Princess the next morning, she told me that she had had to pee in the middle of the night. Despite Alex’s warning, she stayed close to her cabin rather than foray into the bush. Her dog refused to join her outside, and in the morning when she stepped outside her door, she was rewarded with what we both, as amateur Bigfoot experts, were able to identify as a gift from Bigfoot: a tangled ball of coarse, reddish-brown fur tangled up with red string. It hadn’t been there the night before. We decided that it was in fact a Lady Bigfoot who was crushing on Alex and who didn’t appreciate two females busting in on her party.

And how about you? Did you ever start off on an adventure in one direction and end up somewhere completely else?