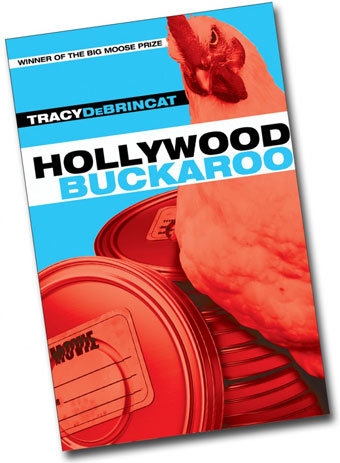 “If Kurt Vonnegut teamed up with J.D. Salinger to write a teaser for Six Feet Under and The Coen Brothers filmed it, you’d have a sense of the gorgeous, off-beat, poetic, deep, astonishingly hilarious, intimate, touching family of characters that Tracy DeBrincat has created in Hollywood Buckaroo.”
— Hal Ackerman, UCLA Screenwriting Co-Chair

“Hollywood Buckaroo will have a joyous ring of truth to anyone who has toiled (or tried to) in the crazy, silly, and ultimately bizarre world of show business that is brought to life so wonderfully within these pages.”
— Ron McLarty, bestselling author of The Memory of Running and Traveler

“Hollywood Buckaroo is so funny and so entertaining. There is much to like about this, particularly the humor, but even more than that, there are passages where the writing is so amazing, I realized I was holding my breath as I was reading it. Sander’s incredible experiences in Buckaroo may be strange, but they are never boring.”
— Leslie Schwartz, author Angels Crest and Jumping the Green

Hollywood Buckaroo tells the improbable and unintentional coming of age of Sander Sanderson, whose filmmaking aspirations are in the toilet after the death of his father, a successful Hollywood plumber. Unable to grieve for his dad and face running the family business, Sander wangles a shot to direct a commercial in the old west town of Buckaroo to live out his dream for one whole week before resigning himself to a life he dreads. As Sander struggles to rescue the imploding project, eccentric locals jumpstart his creativity and his heart, so he can mourn at last and love again.

How it Got Wrote

When I was going through a rough patch, a friend suggested a trip to the high desert to clear my head. More specifically, she invited me out there to work on a film. The Howling: New Moon Rising (seventh in the non-blockbuster Howling series) is hands-down the worst film ever made. On the one hand, I’m proud to confess I was a part of it. On the other hand, it’s not my fault it stinks. No matter. It brought me to Pioneertown, a replica of an 1880s wild west town built in 1946 by a small consortium of entertainment types including cowboy actors Dick Curtis and Russell Hayden to be used as a permanent film set. With small cabins and larger ranches set among Pioneertown’s surrounding foothills, cast and crew could roll out of bed, plant their pointy-toed boots on the ground, and pop down to Mane Street to for first call. Over the years, Pioneertown has become quite the magnet for musicians, painter, photographers, sculptors, filmmakers, horse and Harley aficionados, desert-sky watchers and all manner of folks who enjoy fringe living with a western flavor. In the book, “Buckaroo” is the name of a fictionalized Pioneertown: a place where miracles and bullshit happen daily, where a person can fall in love or fall off the edge of the world. And I know because I did both.