I have always liked Vermont. I like the hippies and the superhippies, the progressives and the hillbillies, the artists and the crunchies, the lavender ladies and the bunker boys. I like its small towns with friendly names like Johnson and Putney. I like the seasons, so markedly different from California’s. Snow flurries on Easter.  Crocuses […] 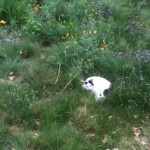 I had a bad feeling that day. We knew the coyotes were around. The neighbors had taken to sitting out on the street on coyote watch, and gather at the corner to talk about whose pets had disappeared. If this one had ventured so close to the door when I was inside the house, he […]

A coyote showed up at my back door at two-thirty in the afternoon. I was working in my downstairs office when he slipped into the corner of my vision in pouring rain. Looking for lunch, he sniffed at the box where the cats sometimes sleep, then gazed into the far distance in such a way […] 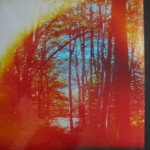 I collected some birch bark and leaves and put together a little set in my studio on the top floor of the two-story barn. The windows may have been undraped, I don’t recall; had they been, I would have pushed the curtains open to let in the deliciously golden afternoon light. As I removed my […] 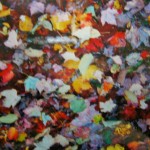 A few years ago, I spent a month at an artist’s colony in upstate New York. The colony was on the grounds of a famous poet, located in and around her original home, writing studio, and barn. There were 6 artists in attendance. Two visual artists had studios in modern quarters that also housed a […]

When Vladimir got to my neck and shoulders, he said, as all people who rub me down do, “Very tight.” “I know,” I said. I drive. I write. I compute. I live in America. My neck and shoulders are extremely tight. You got a problem with that?! He placed his index finger at the base […]

Any cookies that may not be particularly necessary for the website to function and is used specifically to collect user personal data via analytics, ads, other embedded contents are termed as non-necessary cookies. It is mandatory to procure user consent prior to running these cookies on your website.