Super thanks to Leslie, Ed and Padgett for coming through with the bidness, bigtime! “Hollywood Buckaroo is not just funny and entertaining, it’s smart. Readers will not be disappointed. DeBrincat is an author with an original voice, who can be funny and challenging all at once. Don’t be fooled by this novel’s quirky, witty pace. […]

On the publishing front, here’s the first Buckaroo blurb in: “If Kurt Vonnegut teamed up with J.D. Salinger to write a teaser for Six Feet Under and The Coen Brothers filmed it, you’d have a sense of the gorgeous, off-beat, poetic, deep, astonishingly hilarious, intimate, touching family of characters that Tracy DeBrincat has created in […] 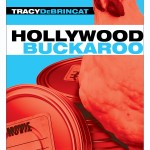 Thanks and kudos to Kustom Creative Los Angeles for the best book cover ever, starring the most feral chicken around! Maybe it’s just me, but if you squint at the image, the film cans and the chicken look like a rock pile at Joshua Tree Park during magic time. Which is sort of what the […]

Early blurbage just in… From best-selling author Ron McLarty: “Hollywood Buckaroo will have a joyous ring of truth to anyone who has toiled (or tried to) in the crazy, silly and ultimately bizarre world of show business that is brought to life so wonderfully within these pages.” From Michael Graziano, Editor at Leapfrog Press, which […]