Filed under "Moon is Cotton" 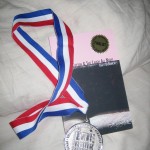 Moon Is Cotton & She Laugh All Night was recently named Finalist for 2 Eric Hoffer Awards. One award is in the General Fiction category, which honors small press and independent publications; the other is for the Montaigne Medal, which is given for books that either illuminate, progress or redirect thought. I believe that I […]

Excerpt from SUPERBABY SAVES SLUGVILLE By the time my little brother showed up, everyone was pretty much sick and tired of the whole baby thing. The Teamsters were on strike, so our dad was walking picket lines up and down the California coast instead of delivering meat to North Beach and Chinatown butcher shops in […]